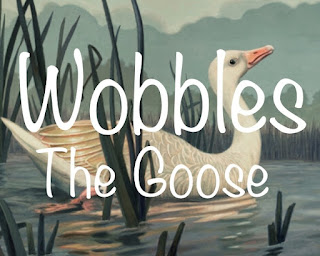 #wotcsafeFive years ago (!), I wrote a few articles about my experiments with… unorthodox cubes in response to the You Make the Cube contest produced by Wizards. The contest was an open solicitation of designs for Cube, which WotC has continued in various forms over the last two years through its Cube Spotlight Series.  This has helped highlight quirky Cube designs during MTGO off seasons, although nothing has really threatened to dethrone the Vintage and Legacy cubes from their staple positions because of their high powered game play, nostalgia hits, and continual updating. Particularly over the past two years of High Power sets, these cubes have provided a great place to highlight the fun new art treatments and expensive cards that are otherwise inaccessible for most Magic players. However, I’m never going to be able to afford to build such a cube, drafting is very difficult to do via web cam and even post-pandemic the prospects of organizing a full, 8 person draft seem slim.
So, this got me thinking about what kinds of cubes might be more affordable and friendly for smaller groups. One thing that I have been able to do via webcam is to build Cube sealed decks via Cube Cobra and play those against friends near and far. The deck building tools on the site make it easy to generate pools, but buying or proxying large cubes is still labor intensive. This resulted in going back to an old invitational format: Duplicate Sealed. Duplicate Sealed is really neat in these days of more web cam play because players can assemble their own copies of the pool independent of one another. It’s also just a card designer’s playhouse because small pools mean you can create truly wacky scenarios, like One With Nothing being a playable card. After all, restrictions breed creativity! With that in mind, I set out to create the minimum viable product of a limited pool that created a lot of depth out of as few cards as possible.
The 2006 Invitational sealed pool clocked at 105 cards and ~$100 dollars. Which is fine if your Wizards or already have the cards. I wanted to go smaller, so I thought about some of the mono-colored cubes I had built back in 2016: http://goblinartisans.blogspot.com/2016/10/bouillon-cubes.html?m=1. Mono color cubes are nice because every card is “playable” without using a lot of slots for fixing mana, although they do need solid themes to avoid being too Soupy. For ultra-small cubes, it’s (usually) important to not wind up drafting below 23/24 playable cards, and going mono color helps with that.
To start, I chose Red to build around: 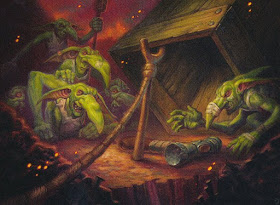 Red was a natural fit, because it’s really well suited to pull in lenticular cards that can fit into aggro or combo or control. Mogg War Marshall is a great example, dumping lots of bodies on the board for pump spells, sacrifice combos or blockers. This cube was designed to be played with minimal rules modifications, except maybe the Dib draft variant I described in the overview. Plenty of card options exist for a Goblin themed mini-cube and it’s easy to grow the size. I stuck with 60 because it means that you could use a 100 card deck box to store this, plenty of mountains, and some goblin tokens.
Next Up was Blue
Blue is trickier because the control elements are much stronger and the aggro elements are non-interactive (Lord of Atlantis mirrors? Yuck). Instead, I went in on a strong Mill theme. 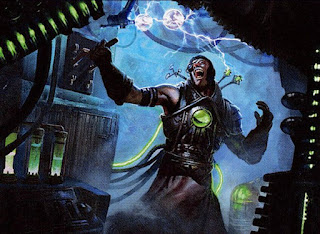 Honey, I Shrunk the Cube

Laboratory Maniac gets 4 copies here, but otherwise this is a straight forward cube design. The Maniacs open a nice tension between aggressively milling your opponent or yourself, so I wanted there to be a critical mass to draft. This cube is slightly larger (75 cards) for two reasons. First, like with arc slogger in the goblin cube, opening up options for deck size seems like a fun place for these cubes to explore so providing a few extra playable means that maybe you build bigger than necessary to avoid decking. The second was thinking about this cube being played by more than two players. With 3 players, each player drafts 25 cards from the entire cube. That’s cutting it pretty tight, but if you drop the minimum deck size by 5 for each extra player you could easily build a 15 land/20 spell deck from that pool. 4 players get 18 spells and 12 lands to build exactly a 30 card deck. Not ideal, but it got me thinking.
Green
Green loves lands and ramp. How could I encourage players to play extra lands in their cube deck? 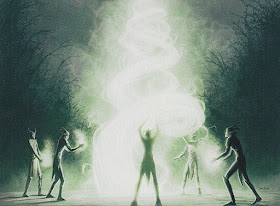 Here, each player starts with a Helix Pinnacle emblem that lets them win once they’ve spend 100 mana on it. If you were just playing one land a turn, that's turn 14 with 5 mana to spare. But you’re not just playing lands! This deck has elf and wall subthemes, ramp, lessons, and some big creatures just to keep players honest. All in just 60 cards! Because consistently hitting land drops is never completely dead with the Pinnacle, it felt ok to give players only 22 cards to build with. I also describe the option of Rochester drafting, which is much easier with the smaller pool. I’m particularly interested to see what happens with more than 2 players!
Black and White I’m grouping together, because these to rely on a similar gimmick to work. 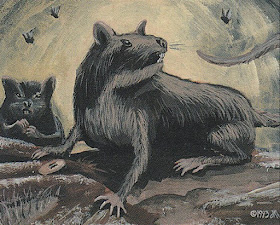 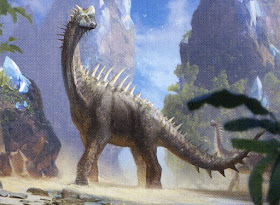 These two cheat their card size by giving players the option of unlimited basic creatures in the form of Pestilence Rats and Imposing Vantasaur respectively. Pestilence Rats is helpful because it’s the only scaling rate that’s still cheap (20 cents are the time of this article) and it has a fixed toughness. That means there’s a much wider array of kill spells and that other creatures can stay relevant competing with the rats. Meanwhile, Imposing Vantasaur is a Conch card. Conch is my go to when thinking about a multifaceted card because of the amazing Conch Cube which uses a similar gimmick. Not every card can Conch, it ideally needs to be flexible, not overwhelming, and have multiple hooks for potential decks. In this minicube, we use every part of the Vantasaur: cycling, dinosaur tribal, toughness/vigilance matters, white reanimation all are big themes.
So those are some examples! I hope you’ll give the format a try, even if it’s just theory crafting some cubeletes of your own. I’m excited to see what you try out.
Update! Fun parallel design! I hadn’t realized that @RyanOverdrive had been designing things in a similar space over the course of the summer. Here is a great tweet thread where he provides links to his cubes and articles.
You can find me on Twitter @wobbles
or in the Beacon of Creation discord https://t.co/WXoiKIC1qf?amp=1
Or on my Tumblr where I post other small and cheap game design ideas: brokeboardgames.tumblr.com
Honk! Honk!
Pinnacle of Perfection
Wobbles at 11:57 AM
Share